Review: I have an opinion about high-priced dining in Salt Lake. Now, admittedly, this opinion is based on incomplete data since I haven't eaten at every restaurant in city (and there are a number of exceptions to what I'm about to say), but I've experienced enough of a cross-section the I'm fairly confident in its veracity. Here it is: Salt Lake has quite a variety of very good lower-priced and middle-priced restaurants; however, its high-priced restaurants, while good, are good, not great.

Bambara is a perfect example.

My son and I went on a whim one evening after strolling around downtown. The atmosphere was elegant, simple, modern. The menu is modern American. So good so far. My son is a man on simple tastes, so he ordered plain noodles with cheese. I ordered the bacon-wrapped filet with summer tomatoes, a sourdough crouton, olive tapenade, charred onions, Maytag blue cheese (which topped the fillet) and some bone marrow. As you can see, it was a beautifully presented dish. 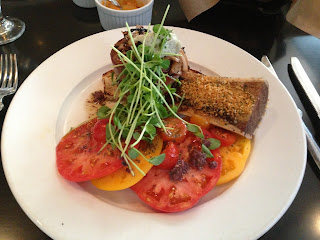 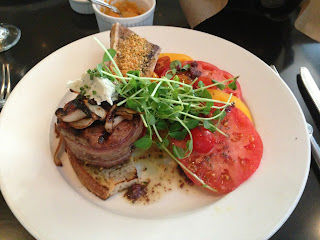 Elements of the dish were as tasty as they were pretty. For example, the fillet itself was perfectly medium-rare, soft, and gorgeously fulfilling. The bacon wrap was a needless crutch that added nothing to the fillet (this is pretty much the case with all bacon wraps surrounding steaks). On the other hand, the Maytag was light and luscious and added just enough blueness to the steak to enhances its flavor.

The tomatoes were of two varieties: beefsteak and cherry. Both were perfectly ripe. The beefsteaks were a meaty, acidic counterpoint to the fillet. (You could almost sense a little whimsy in the choice of a vegetable steak opposite an animal steak on the same plate.) The cherry tomatoes added a nice sweetness and contrast with the more savory beefsteaks, as well as with the very salty (we'll get to this in a minute) fillet and bone marrow.

The bone marrow was exquisite. Perfectly cooked, its fattiness spread wonderfully on the house bread. Among the best I've had.

Elements of the dish did not live up to its plating. For example, the olive tapenade was misplaced and only served to muddle the taste of the tomatoes over which it was lathered (I removed it after finishing the first slice of tomato). It also added a fair amount of saltiness to the dish. This would have been fine if the dish needed salt, but it was over-salted without the tapenade. In fact, there was so much salt that the grilled sourdough crouton, on which the fillet sat, and which soaked up the steak's juices and the tapenade, was salted beyond any pleasantness.

All in all, I enjoyed this dish. The bone marrow was wonderful. The steak was quality. The tomatoes sang. The other issues transformed it from a wonderful and simple summer steak dish into a good steak that shouldn't cost what it did.