Address: 9400 S State St, Sandy, UT 84070. 801.304.4075.
Review: Here's a sure fire why to tell a self-professed Italian restaurant won't produce good Italian food: it's name contains a misspelling. Amazingly, you would think someone would misspell "spaghetti" what with its seven letters and all. But no, somehow someone misspelled "mamma," creating the distinctively non-Italian "mama." Now, one could argue "mama" is an American word and signifies Italian-American food, but in this case even that's a stretch. Spaghetti Mama's does in fact make Italian-American food, but not very well.
The first thing we notice about this restaurant was the austerity of the menu. For dinner (dinner mind you) there were only about seven main entrée choices.
We started our meal with the house salad. Normal house salad everyone's had a thousand times. Next was the calamari. It came lightly breaded (good) and tender (good). It also came doused (bad) in a spicy sauce (meh) which removed all crunchiness from the breading (bad), and inexplicably topped with chopped tomatoes (worthless and tasteless). Then came the chicken parmesan served over spaghetti. Like so many American Italian restaurants, the tomato sauce was not incorporated with the spaghetti, creating a mound of partially dry, partially hydrated pasta. This technical faux paus aside, the sauce was watery and had no character. The chicken was breaded and fried and topped with cheese (what you would expect), but lacked any of the crunchy goodness you expect from good fried chicken. Additionally, the cheese lacked good mozzarella flavor. It was bland, lifeless, soulless food.
At one point during our meal, we looked to the booth next to us and noticed a plaque with the following inscription, "Larry and Gail Miller." Not even the presence of this great businessman and philanthropist can save Spaghetti Mama's from itself.
Rating: 3/10 (5/10 is average)

Address: 1435 S State St, SLC, UT 84115. 801.474.3322.
Review: Thai Siam is one of my buddy Dan's favorite haunts, and for good reason. Upon examining the menu, the lunch special stood out. It allows you to choose two dishes (from among about 15-20 options), gives you a spring roll, as well as sticky rice. I chose the coconut soup with chicken and the pad pra ram vegetarian.
The coconut soup was sweet and savory and aromatic, with infusions of lemongrass and kaffir lime leaves. While it lacked the presence of sour and heat so often present in Thai cooking, it had enough elements to make it work. The mushrooms were uncooked and yet not soggy in the least. The chicken was thinly sliced and tasty and added a necessary protein element.
The pad pra ram vegetarian was equally good, if not better than the coconut soup. The vegetables were well cooked (i.e., they were cooked, but only to the al dente stage). The peanut sauce was unexpectedly sweet (in a good way) and afforded depth to the vegetables. Like the soup, however, the sauce lacked the balance of salty, sweet, sour, and heat so revered in Thai food. In a sense, the dish felt a little muted in order to appeal to an audience of Americans. This is understandably, if not somewhat disappointing. This said, I really enjoyed the dish. Heck, it even made me forget it lacked meat.
And the best part of this lunch: the price. It was $8 including tax. Honestly, a very tasty and reasonably-priced lunch.
Rating: 7.5/10 (5/10 is average).

Address: 5018 S State St., Murray, UT 84107. 801.262.7827.
Review: I happened upon this place while I was visiting a bail bonds shop in Murray. It was 12.45 and the office was closed, so I decided to grab a bite to eat nearby.
East Coast Subs has a family-run business feel. Not dirty like the Philadelphian, and not slick like DP Cheesesteaks. It had the appearance of an old Tastee Freez (remember those?) turned sub shop. It should have stayed a Tastee Freez.
Because it is my mission to find the best cheesesteak in SLC, I tried (you guessed it) the cheesesteak. No cheez whiz here. White American, provolone, or pepper jack only. Ugh. After eschewing the offer of lettuce, tomatoes, etc., etc., etc., I ended up with pepper jack and some hot peppers. The steak was dry, the bread was soft like the mid-section of Chris Christie is soft, the cheese was nondescript, and the peppers weren't spicy. And it was expensive to boot. Not impressed was I.
Rating: 4/10 (5/10 is average)

Address: 2265 Fort Union Blvd, SLC, UT 84121. 801.944.2300.
Review: As you enter Lone Star Taqueria's (LST) parking lot you realize a couple things: (1) there's never enough parking, and (2) it looks like a psychedelic hippie cowboy decorated the joint just before he went the way of all the earth. Amazingly, once you get inside and taste the tacos, neither of these matter in the least.
Now, LST serves all manner food: burritos, tacos, salads, tamales, etc. However, since LST is in fact a taqueria, I stayed with the tacos -- carnitas, carne adovada, and pescado to be precise. 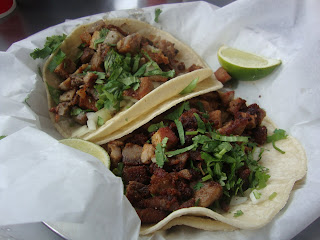 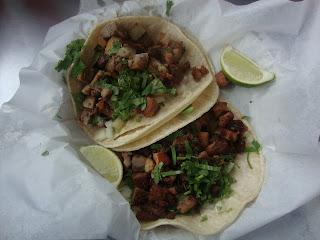 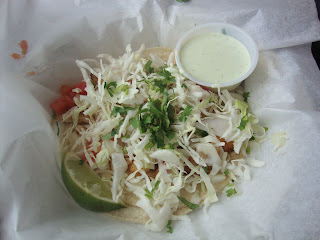 Let me say up front that all three were good, but the pork tacos were very good. The carnitas was flavorful and crunchy, yet tender and juicy. This is a true feat since most carnitas are dry and a little tough. The carne adovada was equally good -- seasoned and fragrant, moist and tasty. The standard accompaniments of onions, cilantro, pico de gallo, and and hot sauce added to the experience. Sublime it was.
And now, the pescado, or fish taco. It had all the elements of a good fish taco: cabbage, tomatoes, cilantro, lime, and onions. What it missed for me was the breading. See, this fish taco is made with marinated and grilled fish, not breaded and fried fish. I know in my mind marinating and grilling produces better flavor, but my heart longed for fried crispy fish on my taco. There is no rhyme or reason to this desire; the heart wants what the heart wants. However, whether it's my heart or my mind, this was a good taco I would eat again and again.
Here's my only real beef with LST: price. You can, conceivably, find tacos or similar quality from a taco stand for half the price of LST tacos ($2.69 for most, $3.29 for the pescado). Of course, why go searching all over kingdom come for something of potentially equivalent quality when you can just drive to LST? Just hope you find some parking.
Rating: 7.5/10 (5/10 is average)

I look forward to going back and experiencing Bayleaf's Asian personality. If it's anything like the southern personality, it's gonna be good.