This is actually a left-over breakfast. We had some challah bread and though it would be a great vehicle for french toast. It was. Enjoy.

In a large shallow bowl, whisk together the eggs, whipping cream, milk, nutmeg, cinnamon, allspice, orange zest, vanilla, honey, and salt. Slice the challah in 3/4-inch thick slices. Soak as many slices in the egg mixture as possible for 10 minutes, turning once after 5 minutes.

Heat 1 tablespoon butter on a large electric skillet pan over medium heat (about 300 F). Add the soaked bread and cook for 3 minutes on each side, until nicely browned. Serve hot with maple syrup and sliced bananas. 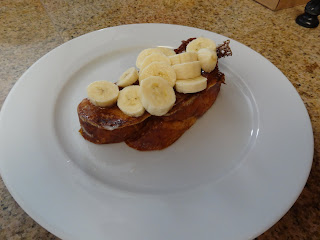 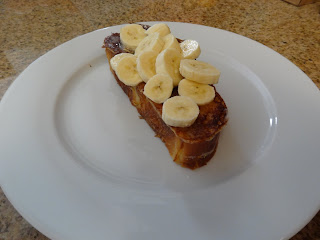 Posted by Marco Brown at 4:13 PM No comments:

Address: 2021 Windsor Street, Salt Lake City, UT 84105. 801.485.3699.
Review: If you have walked the streets of Manhattan, you have undoubtedly seen the ubiquitous pizza shops with those humungous slices nearly as big as the babies no one in Manhattan bothers to have anymore. If you have partaken of one of those slices, you know New York pizza is different from other American pizza genres. It is, in essence, a cross between Neapolitan pizza (characterized by thin crust and the balance of few quality ingredients) and American pizza (characterized by thicker crust and larded with cheese and toppings). And it is, in essence, good stuff.
Este Pizzeria attempts to recreate the New York pizza experience in Salt Lake City. My buddy and I ordered the "pink pizza" (marinara mixed with ricotta, hence the pink, topped with mozzarella) with sausage. The ricotta and tomato mixture is a personal favorite, and is actually quite common in Italy. Este uses very small curd ricotta, so the mixture took on a creamy textured feel. The mozzarella was good, and I enjoyed the thick-cut saltiness of the sausage. The crust, which is what a pizza is really all about wasn't exactly New York style because it was too thick, but is was toothsome and tasty.
Too be honest, Este's pizza isn't really New York pizza. And while I usually downgrade a food if it isn't what it says it is, I enjoyed Este's pizza for what it was: good pizza.
Rating: 6/10 (5/10 is average).

Posted by Marco Brown at 9:54 AM No comments:

There are a number of food-centric holidays in the world, but Thanksgiving, with its unique mix of overt religiosity and ode to American exceptionalism, is a family favorite. We had some good friends over this year, and in so doing ate probably 7000 calories each. We then watched football and "Captain America" (again with the American exceptionalism theme). Great day.
And then there was the food. Here are some pictures, followed by descriptions. 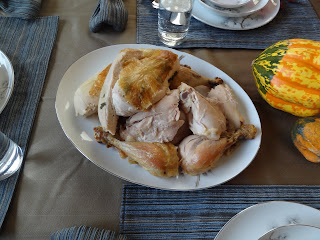 Chicken (yes, no turkey, chicken) brined and stuffed with lemons and sage before roasting on a bed of onions, garlic, and celery. 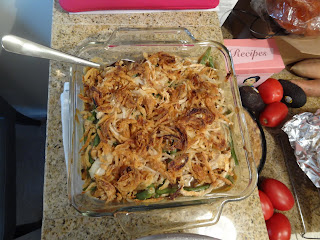 Green bean casserole (my wife's personal favorite). Loaded with mushrooms and onions, and made from homemade chicken stock and half-and-half. 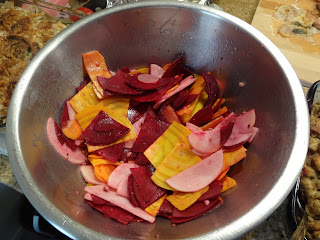 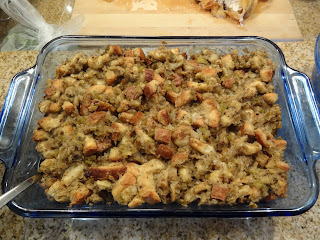 My mother's stuffing. (My favorite Thanksgiving food, whose recipe will remain secret for the rest of time and eternity.) 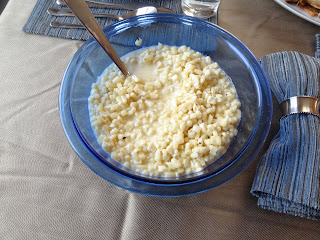 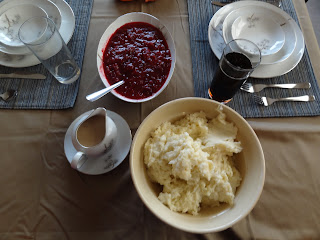 Potatoes, gravy, and cranberry relish. The gravy was made from the chicken pan drippings. The cranberry relish is a mix of cranberries, strawberries, sugar, and orange juice. Other than the stuffing, the relish is my top Thanksgiving food.
Oh, and we had desserts (pumpkin chocolate bread pudding made with chala bread, pumpkin and cranberry cheesecake, chocolate pudding pie, and a dutch apple pie.
And there you have it: Thanksgiving at Trattoria Brown. A wonderful day it was.
Posted by Marco Brown at 1:02 PM No comments:

Address: 1078 W South Jordan Parkway, South Jordan, UT 84095. 801.446.5800.
Review: In the never-ending search for the best burger in Salt Lake City, a friend and I packed ourselves into the car and journeyed to Buster Burger. Luckily for us, the jaunt didn't waste too much gas.
As you can tell from the preceding sentence, Buster Burger did not exactly impress. I ordered the double cheeseburger with sauteed onions, topped with an egg. 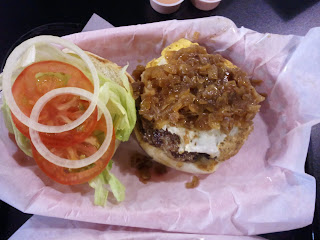 First, the bun. It was white bread, milquetoast, flavorless. Moreover, about halfway through the burger, it began falling apart. The patties were thin and dry and blah. The onions, while obviously plentiful, were slimy and bland. Perhaps most disappointing was the egg. It was cooked all the way through, which means there was no yolky goodness dripping from the burger. While it wouldn't have saved this burger (no one thing could have), it would have helped.
And then there were the fries. 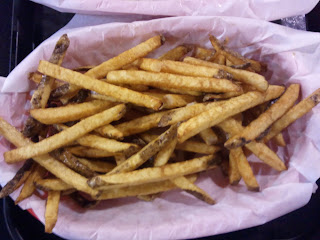 Address: 2940 Clark Avenue, Long Beach, CA 90815. 877.553.4408.
Review: Recently, I found myself with three hours to kill in Long Beach on my way back from DC. Since the airport (a 60's antique) is under construction, there wasn't much to eat other than five-dollar bags of chex mix and thee-dollar bottles of Dr. Pepper. I wasn't havin' none o' dat, so I wandered away from the airport in search of foodstuffs.
After half-an-hour, I happened upon Baja Sonora in a small Mexican strip mall. 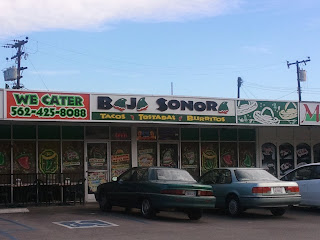 I ordered a combo plate, with a chile relleno and pork tamale, oh, and rice and beans. 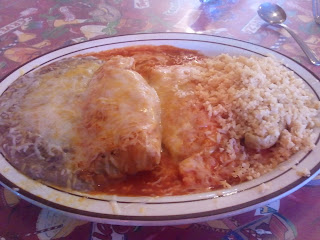 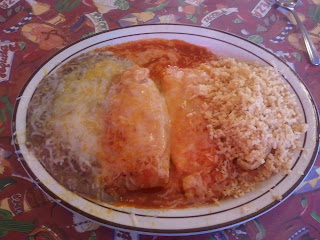 But before this plate arrived, there was the salsa bar. All the usual suspects were present, like red and green salsas, roasted jalapenos, and home-prepared tortilla chips. The chips were light and airy and the salsa was fresh and tasty (although the hot wasn't hot). The fact it was all free made it that much better.
Now, back to the combo platter. The beans: good. The rice: standard. The tamale: dry masa and tasty, but somewhat dry pork. The chile relleno: good chile taste; overabundance of cheese. In fact, the entire plate was overcheesed. (Now, this is a difficult thing for me to admit, since cheese is second only to pork on the hierarchy of items that prove God exists and loves us.) I wish the other ingredients had a better chance to shine.
In the end, I would come back (if I'm ever again in Long Beach, which may not happen since I've been there once in thirty-four years) for the salsa bar, but not for the combo plate.
Rating: 5.5/10 (5/10 is average).

Posted by Marco Brown at 4:14 PM No comments:

Address: 1238 H Street NE, Washington, DC 20002. 202.399.2546.
Review: Having just finished with the Federalist Society National Convention in DC, there was an entire evening of free time before flying home to Salt Lake. Under such circumstances, dinner at a venerable DC eating house was on the menu. After some research, Dr. Granville Moore's, with its wide range of mussels and fries options won the day.
First thing I noticed upon arriving at Granville's is that its a bar that serves food, not a restaurant that serves intoxicating liquors. I ended up eating at the bar. On one side was a eating mussels and fries and downing a variety of beers. On the other, two ladies looking for love in all the wrong places. Thankfully, there was enough elbow room to enjoy the food.
And the food was, you guessed it, mussels and fries. The mussels were perfectly cooked, with no hint of rubberiness. The broth they came in, was a beautiful mix of mussel liquor, white wine, lemon juice, blue cheese, pork belly, and spinach. The blue cheese, which was nice and bitter and pungent, had so thoroughly melted into the broth that it became a back ubiquitous back drop flavor. The pork belly added a nice bit of saltiness, although it was a bit overcooked. The spinach honestly didn't add much flavor to the party, but it certainly didn't take away from the other flavors. More than anything, I could have used a little sweetness to counter the bitterness of the blue cheese; but this notwithstanding, sopping up the broth with Granville's crusty baguette was a real pleasure.
Now, on to the fries. They were of the Belgian twice-cooked variety. This process creates a fluffy interior and a crisp exterior, and, as far as I'm concerned, is the only way fries should be made. These Granville fries weren't as crispy as I would have liked, but I ate the entire bowl thanks in large part to the stellar variety of mayonnaise provided. I tried three: curry, chipotle, and truffle. Truffle, as it always does, imparted a nice earthiness to the mayonnaise and the fries. The chipotle was enjoyable and slightly spicy. The curry was the best of the three, with wonderful flavor that I simply didn't expect.
By the end of the meal, I was more than satisfied with the food and the place itself.
Rating: 7/10 (5/10 is average).

Posted by Marco Brown at 7:10 AM No comments:

Address: 180 E 800 S, Salt Lake City, UT 84111. 801.364.4541.
Review: I've been waiting to eat at Guzzi's for a while. The first time I went, and I kid you not, I walked in, saw a full dining room, and was promptly told by the manager, "We're closed." (It was 6 p.m. on a Friday evening.) I looked at the dining room, then at the the manager, and said, "No you're not." He then explained they had just ran out of meat and wouldn't be taking any additional orders. I wondered if he just didn't want to serve an ugly dude like me, but I took him at his word and walked away.
So, now, fast forward four months. I'm at divorce mediation training and decide to give Guzzi's another go. This time there's meat, so I ordered a blue bacon burger. All burgers come with fries (which is the exact opposite of the Cotton Bottom Inn, where no burgers come with fries). 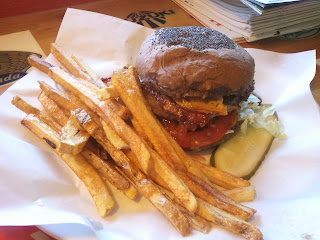 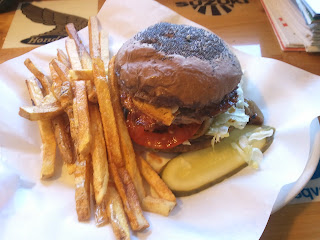 Let's start with the bun. I chose the wheat variety on the recommendation of the cashier. Good choice. It was tasty and soft, but substantial enough to stay together throughout the eating process. The meat was good, fatty, and juicy. There was a fair amount of pink in the middle, which is exactly how heaven intend things. The tomatoes and grilled onions worked. The blue cheese and bacon was a different experience. It seem like they had been cooked together on the stove top. This meant the bacon wasn't terribly crispy and the blue cheese was a little carbonized. Cooking blue cheese is a risky maneuver because it tends to lose some freshness and tang, and that's what happened here. Interesting thought that didn't work so hot in practice. Overall, it was a good burger that could use a bit of tweaking.
The fries. Well, they weren't that strong. Fresh cut, once fried, makes a fry dense, limp, and meh. The twice fried method would have really upped the quality. On a more positive note, the fry sauce was money.
There's strong and not at Guzzi's, but it's probably good enough to warrant a return trip, provided they keep the meat stocked.
Rating: 5.5/10 (5/10 is average)

Posted by Marco Brown at 7:05 PM No comments: