Address: 255 E 400 S, Salt Lake City, UT 84111. 801.328.3663.
Review: With only an hour between a motion to suppress and a police interrogation to attend, Charlie Chow's was a quick and central choice. Things started well when my buddy and I told the waiter we were in a hurry and they accommodated us quickly.
I ordered the kung pao chicken lunch special. It came with ham fried rice and noodles. The chicken was thinly sliced and cooked in a sauce with vegetables, such as water chestnuts, baby corn, and bell pepper. While the chicken was nicely cooked, there was not spice to the sauce (I had to add a boat load of siracha to feel any heat), nor was there anything particularly special about the dish, although it was quite oily. It was exactly what you would expect from an americanized Chinese restaurant. The fried rice was about the same: perfectly normal stuff. Nothing noteworthy. The noodles were the best part of the meal. They were simple, salty, well cooked. All in all, very standard food.
If you're looking for good quality Chinese food, Charlie Chow's isn't the place for you. If, instead, you need okay Chinese food fast, Charlie Chow's is an alright bet.
Rating: 5/10 (5/10 is average).

Posted by Marco Brown at 2:10 PM No comments:

This is a bit of late Thanksgiving post. My favorite part of the Thanksgiving meal with the stuffing. There's nothing better than that bready, buttery, goodness. I look forward to it every year.
Beyond the actual meal, however, there is a special Thanksgiving leftover food that really takes the cake. It's called bubble and squeak. Now, bubble and squeak is a traditional English food made from the leftovers of a roast dinner. Essentially, it's roasted vegetables mixed with potatoes (which acts as a binding agent). The resulting amalgam is made into a disc and pan fried until it's a crispy brown. The "bubble and squeak" actually refers to the sound made while frying.
In the Trattoria Brown version of bubble and squeak, one mixes together mashed potatoes, stuffing, chopped turkey, and whatever roasted vegetables were prepared. One then fashions a hockey puck size disc of this Thanksgiving goodness, flours both sides, and drops the disc into a skillet with melted butter (medium to medium high heat is recommended). Cook each side for approximately two minutes, or until golden brown, then plate. As a finishing touch, spoon over some of your leftover cranberry sauce (or cranberry relish, as prepared at Trattoria Brown), and voila! 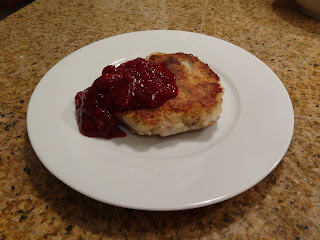 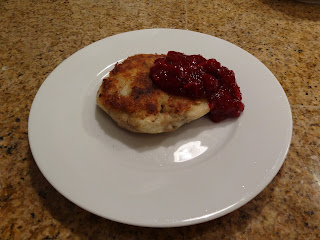 Thanks be to the English.
Posted by Marco Brown at 9:31 AM No comments:

Address: 750 E 2100 S, Salt Lake City, UT 84106. 801.484.7200.
Review: Situated a mere skip-and-a-jump away from my favorite Sugarhouse restaurant, O' Falafel, is the ever bustling Original Pancake House (the House). On a recent bright Saturday morn', my wife's friend was preparing for her doctoral voice recital, and she wanted pancakes. Hence, we enjoyed a group breakfast at the House.
After the obligatory wait, we perused the menu and decided to share a Greek omelet. 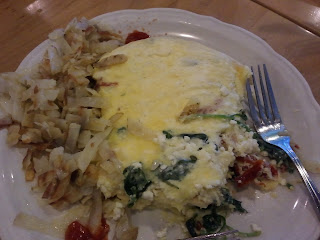 We were fortunate to have decided to share, because this was a massive omelet which came filled with spinach, sundried tomatoes, and feta cheese. Unlike a french omelet, which are usually light but dense at the same time, this omelet was all about light and airy. I had never encountered an omelet like this before, and I liked it. The tomatoes and feta added a nice bit of acid and salt, but the spinach added no flavor or texture. The potatoes were a bit disappointing. They were cooked, but not crispy, so they were just a bit limp and oily. Ultimately, I'm looking forward to trying more omelets, but not more potatoes.
And then there were the pancakes. Our omelet came with the buttermilk variety. 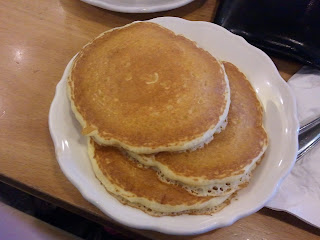 Mmm, pretty. And don't worry, if you prefer another genre of pancake, you're in luck, because the House serves umpteen different varieties. At our table alone there were buttermilk, chocolate chip, Georgia pecan, and blueberry. Our pancakes were, to be honest, just alright. I enjoyed the taste, but they weren't particularly fluffy, and they were a bit stretchy and tough. The stretchiness/toughness comes from having overbeaten the batter, which produces too much gluten and almost transforms the pancake into a bread product. In the end, while these pancakes are the House's signature dish, they aren't any better than what any mom, armed with a quality recipe, can make on a weekend morning.
I also tried the chocolate chip and blueberry varieties. I was similarly unmoved. And I wasn't the only one; the table was split down the middle regarding the quality of the pancakes.
Rating: 5/10 (5/10 is average).

Posted by Marco Brown at 8:22 AM No comments:

2 bell peppers, one red and one yellow

Place heavy pot over medium high heat, add olive oil and prosciutto and brown. Add chicken and brown all pieces. Add salt, pepper, garlic, marjoram, and tomatoes. Cook 10 minutes, then add wine. During this period, cut bell peppers into strips and add them to a pan over medium high heat, and sautee them with oil and garlic. When the chicken is cooked, add the sautéed bell peppers, mix the dish, season to taste, and serve.

Your choice of aromatic (rosemary, cinnamon, red pepper flakes, or basil) (I would choose rosemary, and about 1 tablespoon, chopped)

1 bottle wine, either a dry red or dry white

Cut boiled veal into 1-inch cubes. Place heavy pot over medium high heat, add olive oil and onions, and cook until they just begin to color (maybe 5 to 6 minutes). At this point, add wine, turn down heat to medium low, and allow to evaporate. When the mixture has thicken (evaporate by about 1/2), add tomatoes, clove, salt to taste, and your aromatic of choice. Keep cooking on medium low heat for another 10 minutes. Add cubed veal and allow to cook until the liquid has sufficiently thickened. (No time guide is given regarding this last step. Essentially, when the liquid has thickened to your taste, it’s done.)

Place pasta in at least one gallon of boiling salted water (add enough salt to make the water taste like a broth). Cook according to package instructions.

While pasta is cooking, place pan over medium heat and introduce olive oil, red pepper flakes and garlic. When the garlic begins to turn color (about one minute), add tomatoes and salt and cook over medium high heat.

When the pasta is finished cooking, drain and place in a bowl. Add sauce and parsley and thoroughly mix. Add pecorino to taste.

A family friend asked me to translate a few recipes from an Italian cookbook entitled "Sapori e profumi di Roma: ricette della cucina romana e ristoranti tipici." I thought others might be interested in these recipes, so here's the first: bucatini all'amatriciana.

Place in a cast iron pan (or a normal one is fine) olive oil, red pepper flakes, and the guanciale/bacon, which should be cut into pieces. Cooked over medium high heat until guanciale is cooked but not yet crispy. Add white wine, cook for one minute, then remove the guanciale/bacon from the pan and place on a plate. Crush the peeled tomatoes and add to the pan, along with salt to taste. Cook over medium low heat for approximately three minutes. Place back in the pot the guanciale/bacon and continue to cook.

Place pasta in at least one gallon of boiling salted water (add enough salt to make the water taste like a broth). Cook according to package instructions. When finished cooking, drain and place pasta in a bowl and add the pecorino cheese. Wait for a few moments to allow pecorino to begin to melt, then add the sauce. Stir and add more pecorino to taste.
Posted by Marco Brown at 12:09 PM 1 comment:

Eggs in the City

Address: 1675 E 1300 S, SLC, UT 84105. 801.581.0809.
Review: My wife's friend is having her recital today. In preparation for this event, we all took her to breakfast yesterday. She needed some good ol' protein, so a place called Eggs in the City (Eggs) seemed liked a perfect fit.
I ordered the corned beef hash. (Before I deconstruct this dish, let me take a moment to speak about my father. He is a great man. He has three masters degrees, I believe. His mom, my grandma Brown, held a doctorate in education and was an associate professor at New Mexico State University. In all, he's a very intelligent man (too bad none of that intelligence transferred to me), but he loved corned beef hash from a can: a decidedly unintelligent choice. Because of this, all I remember about corned beef hash is salt and little white globs of gritty fat.) 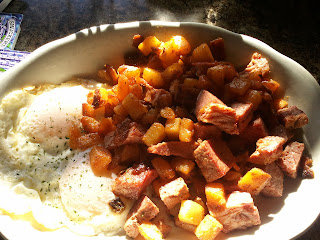 The celestial lighting aside, this was an enjoyable dish that brought me back to my Irish roots (of which I have absolutely none). The corned beef was done in-house. It was tender, juicy, slightly charred, and the spices were prominent and savory. The potatoes were likewise savory, as well as light and salty. The eggs, perfectly cooked to an over easy, extruded their yolky goodness, which added a wonderful natural sauce to the hash.
In contrast to my Irish fare, my wife chose a decidedly Mexican dish: huevos rancheros. 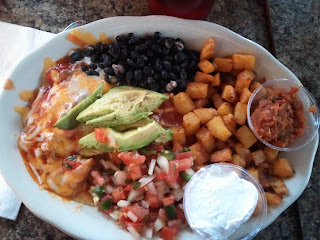 I can't speak at length about this one because I only had a couple bites, but the one thing I noticed was the distinct lack of huevos in them there rancheros. They were buried under there somewhere, but only heaven knew where. Oh, and a second thing: there was copious amounts of cumin in the salsa. I mean, enough cumin to make it seem like a gaggle of cumin families moved onto salsa lane and produced copious amounts of cumin babies.
I liked Eggs. I'll certainly be back the next time I need to get my Irish, but not Mexican, on.
Rating: 6/10 (5/10 is average) it would be higher if not for the huevos rancheros.

Posted by Marco Brown at 2:56 PM No comments: