Review: I was in Roy for some training (I know. I know. Who goes to Roy for anything?) and tried the "Diner, Drive-ins, and Dives" recommended Burger Bar. 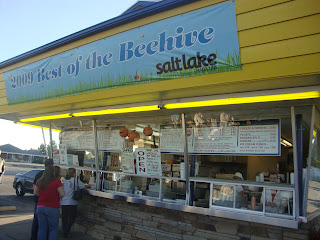 I figured the joint would be good when I talked with a regular who had been frequenting since he was a child many a decade ago. Let's see if the regular's years of loyalty were worth it.

The first time I went, I decided to go a little back country and try the elk burger. 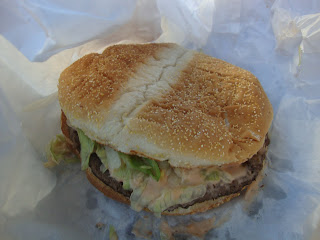 Elk has a distinctively different taste than beef. It's not gamy, but it does have a full-bodied flavor that works well in burgers. Elk is also a very lean meat, which means it dries quickly upon cooking. My burger was slightly dry, but the flavor more than made up for that. The burger was simply dressed with fry sauce, lettuce, and pickles. The fry sauce was tasty, and not overpowering at all, but what made the burger was the pickles. For whatever reason, when the pickles and the elk combine, they sing. And the bun was soft yet firm -- i.e., perfect.

The second time I went, I had the Big Ben. The Big Ben is nothing more than a really large burger. And it's large in width, not in height. This is what makes it different than other large burgers. The Big Ben was simply dressed, and it was slightly juicier than the elk burger. That said, the elk had better flavor.

The fries were what you would expect: crispy, light, flavorful. 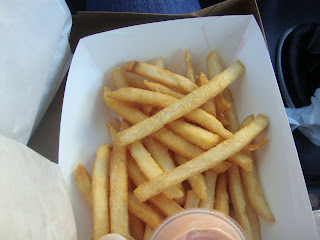 The fry sauce that dressed the burger also dressed the fries. Good combo. I also had a chocolate malt on my second visit. Good stuff. Nothing spectacular, but a good ol' timey malt.

In the end, this place produces good stuff, especially the elk burger. My next trip to Roy (whenever that will be) will be filled with more quality time at the Burger Bar.
Rating: 7/10 (5/10 is average)

Review: After the BYU v. U of U game, my wife, son, and I decided we would grab some pizza at Settebello. Since everyone in SLC had the same idea, we waited next door in Capo Gelateria for about thirty minutes. Well, next door is really a misnomer. The two establishments are attached to one another. You can order your gelato and pay for it while dining in Settebello. It turned out to be a good wait.

My son became addicted to gelato while living in Italy when my wife was performing "Madama Butterfly" near Rimini. The addiction has proven long-lasting, since every time he sees gelato he stares at it, points at it, longs after it, until we purchase it for him. He's rather fond of chocolate. We're rather fond of pistachio. We picked up a medium cup with both flavors.

Now, we don't normally buy gelato in America since we are so often disappointed by it. This time, however, we enjoyed it. Both gelati were dense and creamy, although a little airier than it should be. The chocolate had a nice, deep chocolate flavor. (Aside: this chocolate gelato possessed none of the pronounced bitterness found in the chocolate gelato at Vinto.) The pistachio lacked a truly upfront pistachio flavor (this is a shame since we have very good pistachios grown nearby in Arizona), but it was quite good nonetheless.

We also sampled some of the other flavors. All were good. We could tell they use fresh ingredients and cared about their product. This said, as with all American gelaterie, the fruit gelati lacked assertive fruit flavors. Hopefully, Capo will continue tweaking their recipes. They're certainly on the right track.

Review: I experienced the Lamb's Grill Cafe for the first time during a recent group lunch. We all sat in the dining hall in the back of the restaurant. The ambiance was great. Classy. Relaxed. Quiet. Everything you want in a great lunch spot. The food, however, was not good.

Since our group was of fairly ample size, we had a limited menu. I chose a ground beef steak. The steak was altogether dry and tough. Worse yet, it was smothered with a vinegary roasted bell pepper sauce. There was almost as much sauce as steak -- never a good thing. The mashed potatoes were unremarkable, and the vegetables were standard, unseasoned steamed vegetables with about as much character as your junior high math teacher.

Attempting to assess whether I just picked a substandard dish, I talked to others around me about their food. All said the same thing: The food wasn't very good. Eventually, one of the lunch organizers told me they knew the food wasn't that good, but they chose Lamb's Grill because of its downtown location and the dining hall space. Sounds about right.

I honestly hope the rating I'm about to give will change as I frequent the Lamb's Grill again. That said, hope doesn't change bad food into good food.

Posted by Marco Brown at 2:31 PM No comments:

Review: MacCool's is sort of, kind of, an Irish pub with pub food. I say sort of because much of the food is quite americanized. That's fine. Hybrid food is very often good food. This hybrid food, however, is a bit hit and miss.
My buddy and I started with lamb's ribs which were topped with a barbeque-esque sauce, a creamy blue cheese sauce, and scallions. 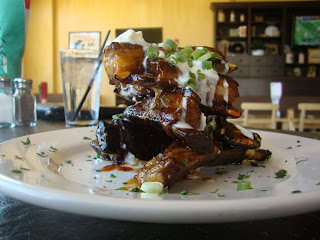 Now, I love lamb but I had never tried lamb ribs. These were a good intro. They were tender and meaty. The sauce complimented the meat, which you could readily tell was lamb. The blue cheese sauce was a bit of a throw away component since it didn't taste much of blue cheese. While I'm not entirely sure what this dish had to do with Ireland, it was tasty.
Next on the menu was the potato and cheese casserole. This was a far more Irish-inspired dish. Unfortunately, the dish lacked taste. The potatoes were al dente (which was probably purposeful), but even with all the cheese (and there was a lot of cheese) the dish was under salted. Coupled with a lack of salt, the dish lacked anything that made the taste interesting. It was very one note, as it were.
Last was the bison burger with homemade chips. Again, nothing to do with Ireland here, and not much to do with taste either. The bison, as it so often is, was overcooked and dry. The sauce added so little to the dish that I can't even remember the ingredients, although I vaguely recollect tomatoes. The chips were fried in house, but they added little to the dish. No real flavor, not much salt. In all, not a quality burger. 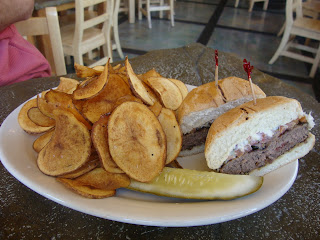 In MacCool's defense, we only ordered one Irish-inspired dish. As I go back to MacCool's, I'll make it a point to eat the Irish dishes. Hopefully, those will be of a higher quality.
Rating: 4/10 (5/10 is average)

Posted by Marco Brown at 1:58 PM No comments:

Review: It's cliche to say the Philadelphian is dirty. Sometimes cliches are true, and this one is. Parts over the grill are blackened by hot grease. The backroom is visible for all to see, and it's stacked to the rafters with junky stuff. But, you know what, sometimes dirty is good. Hole-in-the-wall joints so often produce great, unpretentious food. The Philadelphian delivers on unpretentious food, but only half delivers on great food.
I ordered the cheesesteak with onions, hot peppers, and bell peppers. 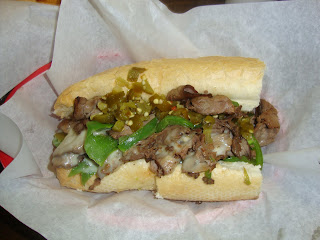 A cheesesteak has three primary components: 1. bread, 2. steak, 3. cheese. The bread at the Philadelphian was soft, very soft, too soft. Some people like ultra-soft bread. I'm not one of those people. A bread with a little tooth makes a much more interesting sandwich. The steak was tasty, although a bit dry. The cheese was provolone only. As I eat more cheesesteaks, the more I'm convinced Cheez Whiz is the way to go. There's just something about how it melts into the steak juices that makes the cheesesteak experience special. In all, the cheesesteak was alright.

And then there were the onion rings. 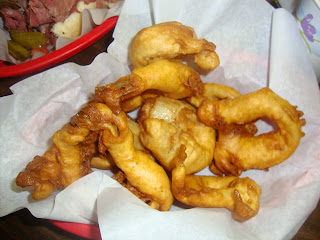 I know. I know. They look like fat fried calamari. Part of the reason they look like this the batter is hand-made in a bucket right before your eyes. It's a beautiful thing to watch. Unfortunately, the batter to onion ratio is about 5 to 1. The onion is simply lost amongst all that batter.

In the end, I liked this place. There's something to be said for small joints churning out pretty good food day after day. But I didn't love this place like I hoped I would.