Review: Boston conjures up so many thoughts: the Red Sox, the Patriots, the word "wicked," and, perhaps most prominently, lobster rolls. A lobster roll is an exceedingly simple concept. You put lots of lobster on a grilled roll and eat. In fact, the logic confirming a lobster roll's goodness is clearly demonstrated with the following syllogism. Lobster good; roll good; ergo lobster roll good.

I heard Neptune Oyster had one of the best lobster rolls in the city, so while seeing the historical sites, I dropped in. First thing I noticed was Neptune doesn't not sport many seats, so I waited outside for a while before gaining entrance. Once inside, I began with a buttermilk johnnycake topped with honey butter, smoked trout tartare, and sturgeon caviar. It looked a little sometin' like so. 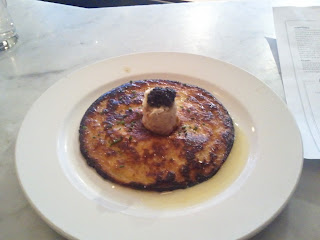 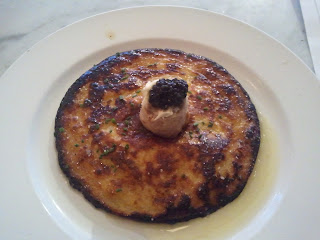 Honestly, the johnnycake was a this-sorts-interesting-so I-guess-I'll-try-it choice. So glad I took the chance. This was a damn johnnycake. the cake itself was moist, creamy and surprisingly light. The trout was beautifully smoked. The caviar was salty and tasted like the sea. And the combination of the smoke, salt, and honeybutter was magical. One of the best dishes I've experienced in a long time.

And then came the roll. Again, this is an exceedingly simple dish. the Maine lobster was cooked in butter and placed on a grilled roll. Oh, yeah, and there were fries, but who cares? (The fries were good,  not great but good, and the mayo accompanying them, which is not pictured, was quite good.) 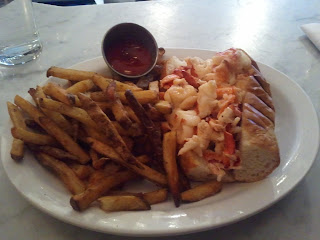 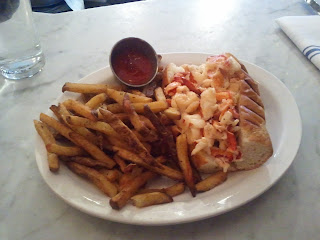 So, no matter what's on a sandwich, every sandwich starts with the bread. The roll in this case was exceedingly white, toasty crunchy on the outside, and nicely dense and chewy on the inside. Good start. And while bread is always the starting point, and usually the most important component of any sandwich, lobster is the star here. And, thankfully, this lobster was as good as American lobster gets. Cooked to perfection in seafood's best friend (i.e., butter), it was succulent and luscious on the tongue. It also possessed that slight sweetness every lobster lover adores. I squeezed on a bit of lemon, which added a nice acidity and cut through the butter a bit. In the end, deliciousness found in utter simplicity: nothing could be better.

Beautiful meal in a beautiful city.

Posted by Marco Brown at 7:34 PM No comments:


Review: Korean cuisine represents the confluence of a food I know relatively little about, and tastes I dearly love. The heat, the sweet, the sour, the salt. So good.

My buddy Dan and I went in search of some good Korean, and the Korea House got the nod today. Upon entering, Gangam Style filled the restaurant and a boy was dancing that ridiculous horsey dance Psy popularized heaven only knows how. After Gangam Style ended, the child stopped galloping and nondescript Korean music ensued, as did the food. I ordered osam bulgogi (i.e., spicy Korean bacon and squid). Surf and turf, baby. 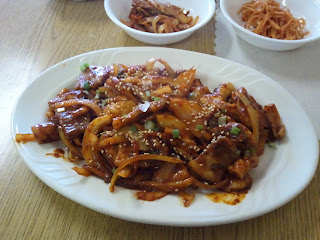 Our meal came with a number of sides, including the best kimchi I've ever tasted (more on this later). 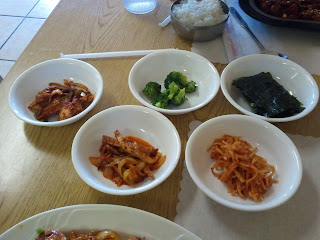 The osam bulgogi was a beautifully savory dish. The Korean bacon is bacon like pancetta is bacon: sort of but not quite. It doesn't have the smokey quality of American bacon, but it is pork belly nonetheless, and pork belly can never be anything but money. The squid had that chewy-tender quality of well cooked squid (it could have been a little more tender, but nothing's perfect). The onions and garlic added a savory earthiness that did not overpower either the Korean bacon or the squid. The sauce was all chiles and luscious oil. Just an enjoyable dish. And, while there wasn't as much heat as I would have liked, there was enough to balance out the dish.

The sides. Oh, the sides. There was some seaweed, some broccoli, some yada, yada, yada, and then there was the above-referenced kimchi. Tender, salty, spicy, acidic, and yet amazingly fresh for a fermented dish. Best I've ever tasted, although my experience with kimchi is admittedly limited.

Mmm, can't wait to go back and try more dishes.

Posted by Marco Brown at 9:14 PM No comments:


Review: Thai food is based on balance and juxtaposition of contrasting flavors. Sweet juxtaposes sour. Salty contrasts with sweet. Sour and bitter enter the mix. Capsaicin adds a beautiful heat that adds interest and aids in digestion. In order for Thai food to work, all these must be present and in the right amounts.

I'm going to be brutally honest, I'm watching Oregon take it to K State right now, so I will cut to the chase: High Note Thai Cuisine just didn't stack up. Well, okay, I'll elaborate a bit. I ordered the yam salad with beef and pork. 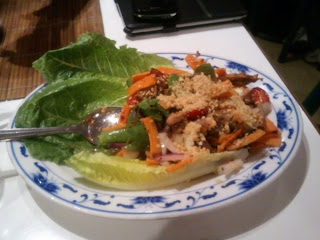 The salad included sliced beef and pork, an an assortment of raw vegetables (i.e., tomatoes, carrots, onions, sweet peas, and a nicely acidic lime and herb sauce. It was served on a bed or romaine and only heaven knows why. The best part of this salad was the vegetables: crispy, tasty, refreshing. The meat was rather indistinguishable. I had no idea the pork was pork. It could have just as easily been chicken. Likewise, the nuts sprinkled atop (a combination of peanuts and cashews) all tasted like peanuts. The sauce was sweet and acidic. It would have worked well if there had been heat to balance out the sweet, but there was no heat at all, which is unforgivable since I specifically asked that the dish be made exceedingly spicy. Without the heat, the dish didn't really come together in any meaningful way.

And then there was the rice. White. Beautifully sticky. Great stuff.