Review: I read an interview with Supreme Court Justice Antonin Scalia in which he lamented about how he felt like he was always making the same arguments and saying the same things. That's sort of how I feel when I review pizzerie.

At this point I usually talk about the structure of the pizza, how pizza is really about the dough and about balance, as opposed to toppings. I may wax nostalgic about living in Italy and eating the best pizza in the world on spaccanapoli (it really is transcendent). This time I'm going to forgo all that and just talk.

I had the carpaccio to begin. It wasn't carpaccio. Carpaccio is a raw meat dish, and I received a cured meat with a bunch of arugula. Look, I get that sometimes dishes aren't what you quite expect, and you just have to take them as they come and analyze what is good and what might not be good about the dish you receive. This, however, was simply false advertising. Carpaccio is one of the best dishes served in Italy because the meat is raw, fresh, and deliciously tender. A heavy, cured, fatty product, lightened up with some greenery, is not equivalent. 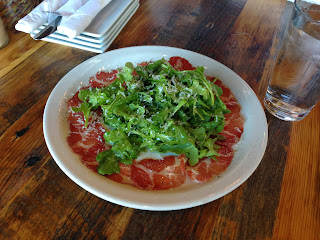 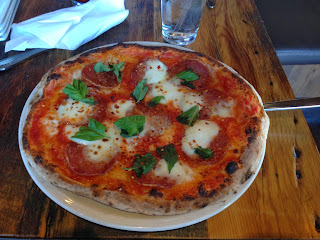 The crust was tough, way too thick, and lacked any flavor at all. The meat was good quality. They had baked the pizza with so little tomato that it was dry as a bone. The basil was uncooked (as in they didn't put in on until after the pizza came out of the oven). Also the pizza hadn't been properly rotated in the oven, so one side was burned, while the other was not. This was a poorly executed pizza in every way.