Review: Pizzeria 712 is a newish pizza joint opened by former Sundance employees. It's location doesn't appear terribly auspicious (it's right off State Street in Orem on the bottom floor of a partially defunct condo-commercial complex), but none of this has anything to do with the quality of the food. So, on to the food.

My buddy Marc and I started with 712's rendition of the insalata caprese. 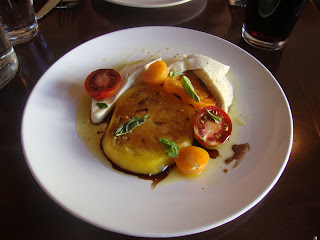 We then moved on to the pizzas.

Mine had soppressata, speck, garlic, tomatoes, and mozz. 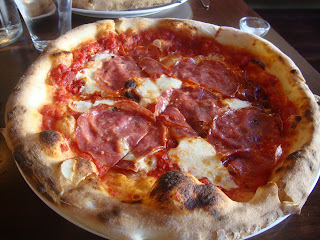 It was disappointing. The crust was light and non-doughy, which is good, but it was pulled in such a way that portions were thicker than others. Because of this, the crust was altogether too thin is some spots. Additionally, cooking the speck (a form of smoked prosciutto) caused it to lose all semblance of smokiness and gave it a leathery texture; a true shame. 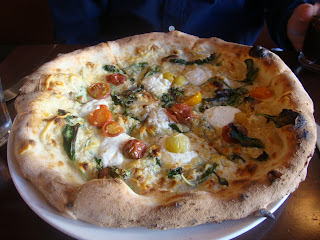 The ricotta was creamy and wonderful. The marinated tomatoes were money. Everything else worked well, although the arugula was wilted and tasteless. Unfortunately, however, this pizza suffered the same crust problem as the first.

In all, a little hit and miss. That said, I'll certainly be back to try more dishes at 712.