A week or so ago, we, as University of Nebraska Law School alums, invaded Tsunami during the lunch hour to get our sushi on. Since two members of our group served their Mormon missions in Tokyo, and since they picked the restaurant, I harbored higher-than-normal hopes for sushi in the Intermountain West.

I began with the sashimi sampler. 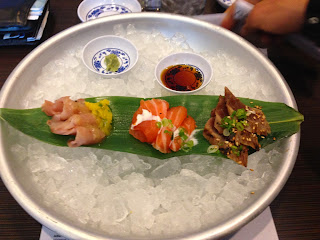 To be honest, I don't know enough about sushi and sashimi to give them an in-depth analysis. I just know I like them, and this sashimi I liked. The fish, while obviously not abundantly fresh, was still fresh as you can expect under the circumstances. The wasabi was light and wonderful. (I received assurances from the waiter that the wasabi was actually freshly grated wasabi, as opposed to the normal paste crap you get in supermarkets or other low-end Japanese restaurants.) The soy sauce was flavorful and not too salty.

I followed my friend John's lead on the sushi and ordered what he ordered. One roll was blue fin tuna and nothing more. Simple. Unadorned. Great. The other was a fried roll, which I was somewhat reticent about, what with it being fried and all. It was the D.T.H. roll. It contained tuna, salmon (an odd choice for sushi far as I'm concerned, but that's because my father ran a salmon hatchery when I was a child), and yellowfin. It was warm, but none of the fish was cooked. While I prefer the purity of nigri, sushi, and unfried rolls, this was pretty good, and the crunch was a nice textural element not normally present.

All in all, an enjoyable sushi meal.