Review: First things first, Stango's isn't a coffee shop, at least not in the modern sense of the phrase. It's more an old-timey soda fountain than anything else. And while I don't normally comment on ambiance, Stango's is filled with kitsch (in the good sense) from the past and old video and pinball games. It's a fun place to hang. Now, on to the food.

The lion's share of Stango's menu is dedicated to sodas and ice cream dishes. Sandwiches are about the only savory dishes served. I ordered the roast beef on wheat. 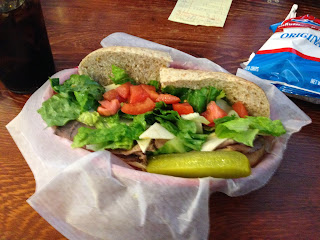 The bread was solid, although not particularly toothsome. (My wife ordered the Italian on white, and the white bread was superior to my wheat.) The roast beef was a good deli quality roast beef, and the horseradish mayo, a classic accompaniment helped round things out. My favorite part of any deli-style sandwich is the pickle, and the pickle was quality. All around, a solid sandwich.

For those who don't know, San Angelo tap water tastes like death. Honestly, it's just plain awful. So, while I'm in San Angelo I have learned to drink soda the entire time. Today's soda choice was Diet Coke. Now, most soda shoot out of a mixing system in perfect industrial ratios, but not at Stango's. The nice woman behind the counter mixed the syrup with water and then added the soda water at the end. It was all very 1930s, and it was nice to see. The result is a soda with less carbonation and more syrup. Good stuff.

My wife and son bought an ice cream cone, of which I did not partake, but about which they said good things. My son also enjoyed his very first pinball game.