Review: As an American, when I think of churros, I think of those puffy pastry sticks doused in cinnamon and sugar you buy at Disneyland for $45 a piece. Thankfully, those monstrosities are about as close to real Spanish churros as Chef Boyardee is to real Italian food or Taco Bell is to real Mexican food.

Having received some tips regarding the best churros and hot chocolate in Barcelona, we meandered to a pair of establishments that share a symbiotic culinary relationship. First, you buys churros at Xurreria. (Apparently, the "X" is pronounced with a "ch" sound in Catalan, making Xurreria a "churreria," or a store that specializes in churros; and specialize they do.) Second, you take the churros to La Granja and dunk them in hot chocolate.

Upon entering Xurreria, all 50 square feet of it that is, you sense the unmistakable perfume of hot oil and sugar and see these beautiful lady-finger like cookies. 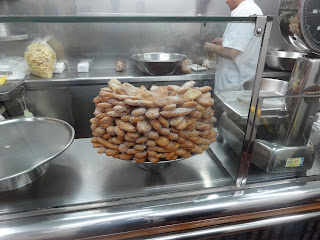 But these are not the main attraction; the churros are. To order, you tell the nice man at the extruder how many orders you would like. He then extrudes the correct amount and plops them one-by-one into the oil. 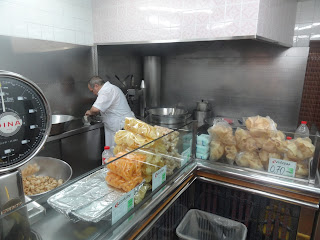 For one euro you receive about five piping-hot sugary churros in a paper cone. 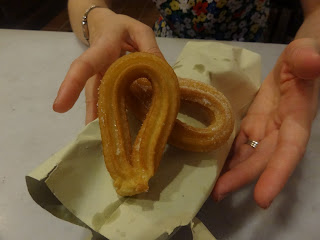 More on the churros in a minute.

To enjoy the chocolate portion of your churros and chocolate feast, you need only walk about eight doors to the east of Xurreria to la Granja. 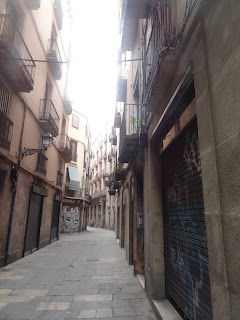 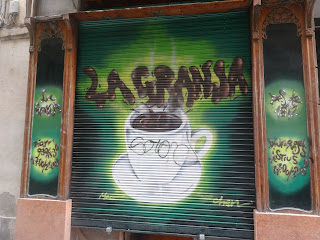 At La Granja there is a wide array of hot chocolates. Most of them come without milk added, which makes them dark, viscous, and delicious. I ordered the hot chocolate picante (i.e., with a bit of cayenne), although I could have ordered it with orange, kiwi, or with about eight other add-ins. The taste was all chocolate all the time. 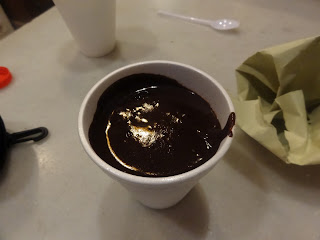 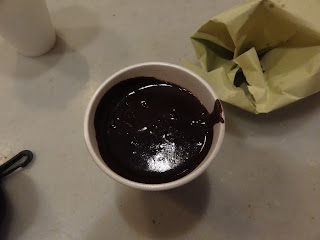 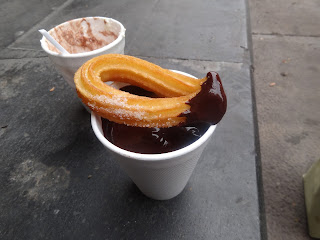 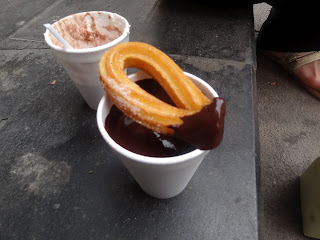 Okay, maybe that was over-the-top, but honestly, the combination was quite perfect. The outside crispiness of the churro contrasted perfectly with its warm doughy interior. And the hot chocolate's silky butteriness and slight bitterness ensured you didn't get too much sugar in any one bite. A beautiful combination of things.

I'm fairly certain breakfasts are ruined forever now that I will compare them with the early-morning churros and hot chocolate from Xurreria and La Granja.