Review: The Dodo Restaurant is a Sugar House staple. It has a clean, modern interior and bustles with activity. It is the hip kind of place you want in Sugar House, which explains its continued popularity over the years. Of course, as knows anyone who has eaten at more than three restaurants in their lifetime, ambience does not guarantee quality food. So, let's see if the Dodo's food lives up to the ambience.

We began our meal with the artichoke pie. It's artichokes baked with cheddar cheese, onions, and garlic. It comes with crackers and lemony mayo. The pie was spongey, savory, and cheesy. The mayo was quite lemony and is an ode to the classic combination of lemon and artichokes. Unfortunately, the pie lacked much artichoke flavor. In fact, the most pronounced flavor was that of cheddar, which is not desirable given the pie's name. 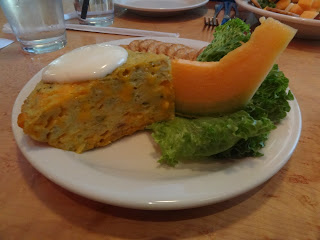 Next up was the roasted tomato polenta cakes. They were served over an avocado spread and under a chipotle mayo. There was also a side of pine nut relish (more salsa than anything) and greens. I couldn't figure out this dish. The avocado spread was pureed avocado; nothing else. No salt, no nothing. The cake was moist, although it didn't taste much of roasted tomatoes. The greens were not dressed, and were out-of-place. The chipotle mayo was the real bright spot of this dish, but one great element does not a dish make. Disjointed is the best word to describe this dish. 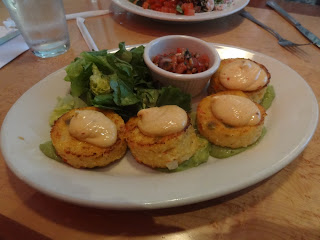 Then there was the entree: cobb salad. It was served with a gorgonzola cream sauce, gorgonzola crumbles, smoke turkey, bacon, tomatoes, boiled eggs, and smoked ham. With a line up like that, how could a salad be anything but stellar? Well, the answer starts with the gorgonzola not having a ton of that beautiful quasi sour flavor that is its hallmark. Then you move to the smoked turkey and ham which had no kiss of smoke flavor (not even a little peck on the cheek). After that, the other elements, which were perfectly fine, made the salad perfectly average. 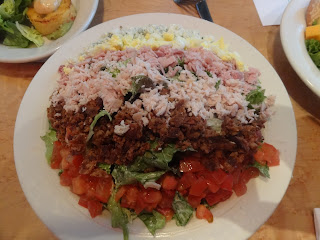 And on to the end. In my pre-meal research of the Dodo, the one constant was the assessment that the desserts were stellar. On the recommendation of the hostess, we ordered the mango and raspberry tart. 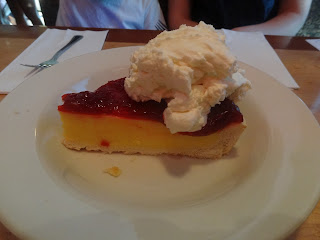 With vivid flavors and a light and a flaky tart crust, this dessert would have sung. Unfortunately, such was not the case. The crust was inordinately dense and lacked flavor. The mango portion tasted sort of like mango, although if the menu hadn't read "mango raspberry tart," I'm not sure I would have been able to discern mango. The raspberry on the other hand, wow. Very fruity flavor, and just the right sugar content. Again, however, one stellar element does not a great dessert make.

In the end, the meal was alright. More than anything else, the flavors were muted and uninspiring. And for the price you pay at the Dodo, muted isn't good enough.