Review: Friday was what we at the law office call "bail bonds day." It's the day during which we go around to all the bail bondsmen in Salt Lake City, chat 'em up, and leave our business cards. Such is the life of a small criminal defense firm.

So, while making our way north toward the downtown bondsmen, my partner turned to me and said, "You ever eaten at the Grove?"

He went on, "We should go. They sell baby sandwiches there."

"Baby sandwiches? What's the draw there?" I queried.

His reply: "No, not small sandwiches. They're called 'babies' because they're big as babies."

When you approach Grove Market & Deli, it looks like one of those places you frequent because you want to buy beer at 10 a.m. on a Saturday morning. 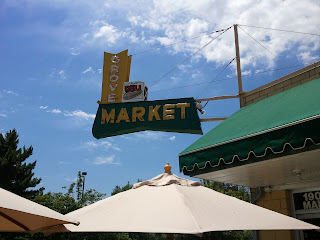 However, in the back is a sandwich shop, and a pretty good one at that. 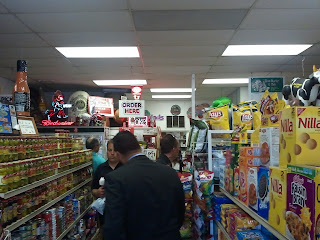 The options are limited and built around the type of meat you want one your oversized French bread loaf. I chose corned beef. The corned beef was not made in house, but, honestly, you can't expect too much from a convenience store sandwich shop. It came stuffed with mayo, mustard, lettuce, pickles, onions, provolone cheese, and tomatoes. And yes, the thing was the size of my first child. 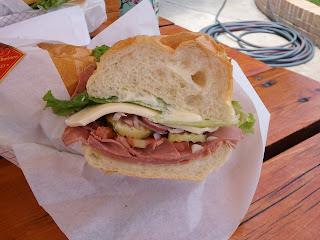 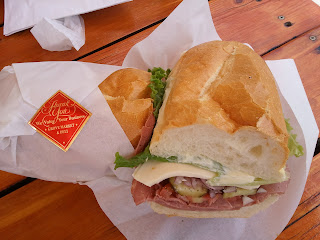 After grabbing a Weinhard's root beer (best root beer on earth, mind you), I partook. The bread was spongy and slightly crusty. Of course, what we conceive of as French bread has nothing to do with actual French bread, but this bread was perfectly suited for a sandwich the size of a small human. Toppings were good, nothing special. Corned beef wasn't particularly spiced, but it was salty and meaty and completely satisfying. This was a fat, fill-you-up sandwich, nothing more, nothing less. And, as such, it was good.