Review: During our morning walk through Barcelona's amazing modernist architecture, we saw a Ferran Adrià museum exhibition regarding his work at his restaurant El Bulli, which many consider the best restaurant in the world. I thought to myself, "That would be neat to see." We then promptly walked to an authentic Catalan restaurant (Restaurante Julivert Meu) for lunch. 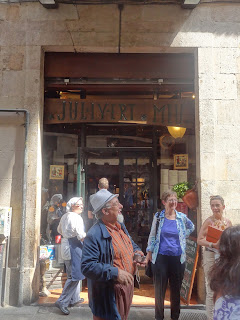 See, while avante garde food might be pretty to look at, and is undoubtedly stellar in its own way, it simply isn't the traditional food of the place. It doesn't have the same feel or taste as foods that have been perfected through repetition for hundreds of years, even though those dishes are quite often its inspiration. Well, now you know my prejudices, as it were. On to the food.

We started with grilled bread, which comes with garlic and tomatoes for rubbing. In so rubbing you taste the essence of garlic and tomato without the heaviness full servings of either would impart. It is a smart way to start a meal.

Next up was a selection of Iberian pork products. 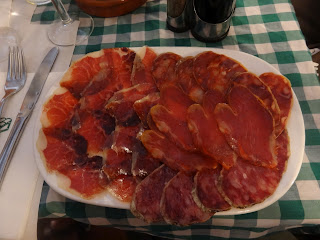 There was a progression on the plate from left to right. The leftmost ham was sweet and ultra thin. As you worked across the plate, the meats become more salty and thicker cut. The salamis were my favorite, although all were good.

And now, the main courses. My son, by means of his mother, ordered a traditional Catalan sausage and white beans. 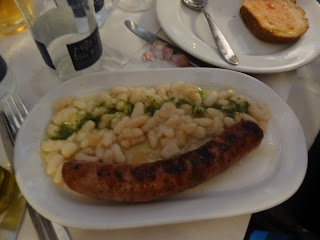 I only had a couple bites, but the sausage was beautifully cooked and juicy. It had those ubiquitous grill marks found in Spanish cooking, which made its juiciness all the more impressive. The beans were cook to the point of falling apart, but they weren't quite. The herb oil streak on top surprisingly didn't add much flavor, which was a bit disappointing because herbs would have cut through a bit of the fattiness of the meat and olive oil.  In all, a solid, rustic dish.


And then my main course: pig's feet casserole. 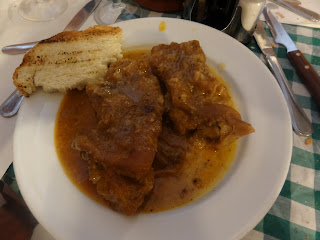 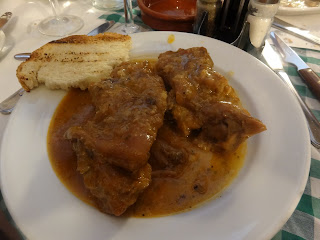 When I ordered the dish the waiter looked at me and said it was all fat and skin, and then he explained what a pig's foot was. I appreciated his explanation, said I understood, and that I wanted to try it anyway. In reality, this isn't a casserole in the American sense of the word. This is a pig's foot slow braised with, presumably, vegetables and broth, until it is tender tender. You have to imagine this is the ultimate in poor man's cuisine. There is almost no meat to speak of. It's almost all fat, skin, and cartilaginous stuff. Normally, this would be a little off-putting, but not in this case. The skin and underlying fat were full of the braising liquid, which was wonderfully savory and aromatic. And while I prefer pork meat to this sort of other stuff, this was an imminently satisfying dish I would eat again in a minute.

We finished with a sort of cheesecake. 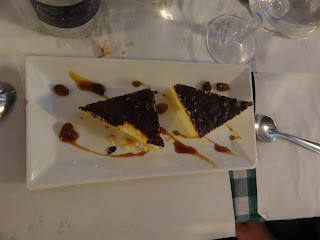 It was a a bit grainy and tasted almost more farinaceous than cheesy. The soaked rasins didn't add anything. Meh.